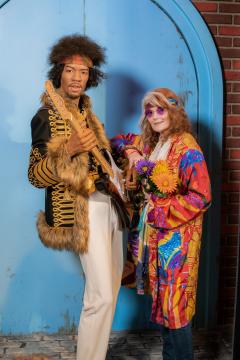 NASHVILLE, Tenn. (May 22, 2019)—To commemorate Woodstock’s 50th anniversary, Madame Tussauds Nashville invites guests to get groovy with peace and love in Music City all summer long at “Waxstock.”

Now through the end of September, two new-to-Nashville vintage figures, Janis Joplin and Jerry Garcia, are on display in fully immersive settings along with Jimi Hendrix’s figure at the popular Nashville attraction. Guests will be transported back to 1969 where they can take photos with the figures from Woodstock and visit all of the other amazing musical legends.

Each of the Waxstock featured artists have a connection with Music City in one way or another.

Months after her encore performance at Woodstock, Joplin performed at the Nashville Fairground’s Coliseum on Dec. 16, 1969. Her trip to Music City was prompted by her desire to meet Kris Kristofferson, whose track, “Me and Bobby McGee” she later covered. The song went on to become her only No. 1 single. Known for her powerful vocals and charismatic stage presence, Joplin was posthumously inducted into the Rock & Roll Hall of Fame in 1995.

Garcia is the renowned lead guitarist and vocalist for The Grateful Dead with such hits as “Touch of Grey,” “Dark Star” and “Uncle John’s Band.” On the first day of Woodstock, the Dead jammed until midnight with their Haight Ashbury vibe but faced electrical issues due to a flooded stage. On Oct. 21, 1972, the Grateful Dead played a free concert in Nashville at Vanderbilt University—it’s rumored some of their equipment was stolen there. It was the band’s last free concert outside of San Francisco.

Hendrix is an electric guitar-playing legend, but few know that Nashville helped boost him to fame. After being stationed with the 101st Airborne at Fort Campbell, Hendrix often played as part of a house band at Del Morocco—a Nashville dinner club on Jefferson Street. While he performed many hours in Nashville, his most memorable performance arguably belongs to his epic take on “The Star-Spangled Banner” at Woodstock.

Madame Tussauds figures are truly a work of art, involving teams of professional artists and sculptors who spend months on extensive research and take more than 300 measurements to recreate world-famous icons, achieving the kind of astonishing realism that has been at the heart of the almost 200-year old Madame Tussauds legacy.

Madame Tussauds Nashville attraction is an interactive wax experience where guests have the unique opportunity to get up close and personal with some of the world’s biggest musical icons. Built to honor Music City and its deep roots into America’s history, Madame Tussauds hosts visitors from across the globe as they enjoy a historical walk through America’s musical past and present with vivid scenes supporting the colorful cast of figures. Learn more at MadameTussaudsNashville.com.