Everyone in the crowd will be ooohhing and aaahhing in unison as they marvel at one of the largest 4th of July fireworks shows in the country! But what really puts it over the top is the GRAMMY-award-winning Nashville Symphony's original medley of songs performed live and perfectly choreographed to the fireworks spectacular! 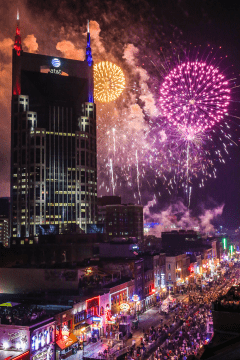 For those primarily interested in watching the fireworks, they are encouraged to go to the following locations that are part of the city’s July 4 event campus:

The fireworks show will be livestreamed on visitmusiccity.com/july4th.

In a new partnership, CMT will air a 90-minute live special that will include performances from headliner Brett Eldredge, highlights from Let Freedom Sing! and conclude with the acclaimed fireworks show. The show will be aired again right after the live broadcast.