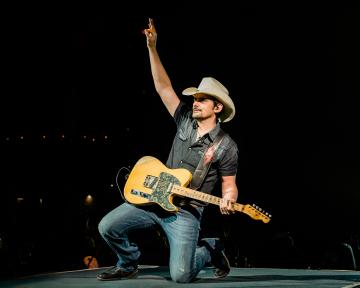 Let Freedom Sing! Music City July 4th presented by Dr Pepper will feature CMA and ACM “Group of the Year” Old Dominion headlining during the free concert on Lower Broadway. The event will feature the biggest fireworks show in Nashville history with the pyrotechnics synchronized to a live performance by the GRAMMY-winning Nashville Symphony. GRAMMY-winning reggae artist Gramps Morgan, country-pop-punk singer-songwriter Cassadee Pope and country’s Levi Hummon will be part of the diverse concert lineup. A total of 17 Nashville-based artists will be featured on the Jack Daniel’s Broadway Stage and at the Amazon Family Fun Zone at Music City Walk of Fame Park, which will include free inflatables, games, and other kid-friendly activities.

The Jack Daniel’s Broadway Stage will be located at First and Broadway. After the concert, the event will shift to Ascend Amphitheater for the live performance by the Nashville Symphony and the fireworks show. Media personality Kelly Sutton will host both stages, Wendy Moten of The Voice will sing the national anthem, Operation Song will perform and Coach (DJ) will entertain between sets. CMT will nationally broadcast a portion of the concert and the entirety of the fireworks show. The fireworks also will be streamed on visitmusiccity.com/july4th.

Performances at the Amazon Family Fun Zone on July 3 for Prelude to the 4th will include Troubadour Blue, Craig Duncan & Friends, Les Kerr & The Bayou Band, The Woods, Jesse Labelle and Emily Earle, along with DJ Dave Audé. On July 4, performances will include SanRafaelBand, Joe West Band, Jenny Tolman, Nick Howard, and Jeverson, along with DJ Rod Youree. Labelle was the winner of the Nashville Needs a Song songwriting competition, a joint initiative in 2020 of the Mayor’s Office, NCVC, and Nashville Songwriters Association International.

Let Freedom Sing! Music City July 4th presented by Dr Pepper is a free, family-friendly event created to entertain Nashvillians and attract visitors to generate economic activity and tax revenue for the city. The event has regularly drawn more than 200,000 attendees – and a record-breaking 350,000 in 2021. Last year’s event generated $14.7 million. This will be the 19th annual celebration produced by the Nashville Convention & Visitors Corp and the 38th in the city.

Information booths will be located at Walk of Fame Park and at Fourth and Broadway. Merchandise will be for sale at the Visitor Information Center in the glass tower at Bridgestone Arena tower, at the Bridgestone Arena Plaza, at the Music City Shop at Fifth + Broadway, and a merchandise trailer on Broadway near Fourth. The Advance Financial Photo Frame will be at Third and Broadway. 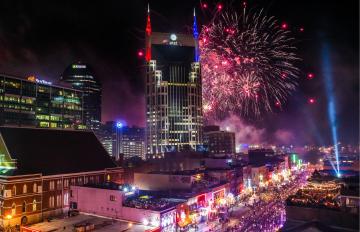 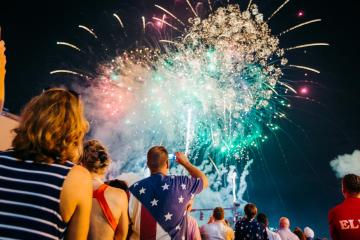 For those primarily interested in watching the fireworks, they are encouraged to go to the following locations that are part of the city’s July 4th event campus:

Note: John Seigenthaler Pedestrian Bridge and the Woodland Street Bridge will be closed to all traffic and pedestrians at 8:00PM. They will reopen following the event at the discretion of Metro Nashville Police Department. 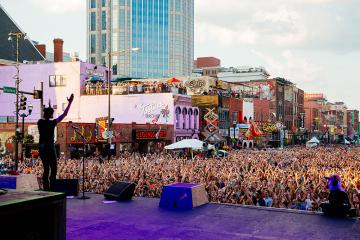 Starting at 9:29pm, the Let Freedom Sing! Music City July 4th event and fireworks show will be livestreamed on visitmusiccity.com/july4th.

Sponsor activations will take place from noon to 7pm.

Budweiser
Visit the Budweiser Macro Bar located at The Green behind Ascend Amphitheater, a great place to relax and enjoy the day.

SLIQ
Visit the SLIQ Spirited Ice Tent to play the SLIQ DISQ game for a chance to win a free pop koozie, perfect for keeping your SLIQ frozen cocktail cool during the festivities!

Wyler’s Light
Cool off at the Wyler’s Light and Pure Kick Hydration Stations. The misting tents and water stations are located throughout the event site. You can also flavor your water by grabbing a FREE sample of Wyler’s Light Singles To Go or Pure Kick Hydration Drink Mix Sticks at select beverage stations throughout the event site and the information booths, which will be located at Walk of Fame Park and at Fourth and Broadway.

The city’s annual free July 4 concert and fireworks show is expected to draw a record crowd and to ensure maximum safety for attendees, backpacks and coolers will not be permitted. Attendees are encouraged to pack smart, stay hydrated and bring refillable water bottles to fill at three free water stations. In addition, five misting stations will be stationed around the event site to help eventgoers stay cool throughout the day. First-aid tents will be located throughout the event site. Attendees are encouraged to pack sunscreen, hats, visors, and sunglasses to help fight the heat.

There will be eight first aid locations with personnel from Vanderbilt Event Medical with Metro EMS.

Attendees should expect walk-through magnetometers and wanding. All personal items are subject to searches.

#NashvilleJuly4 & @VisitMusicCity
The official hashtag for the 2022 Let Freedom Sing! Music City July 4th is #NashvilleJuly4. Please use this hashtag in all social media posts about the event and follow along to join the conversation.

The Advance Financial Picture Frame will be located on Broadway near Third Avenue. Take your photo in the frame and post on social media with the #NashvilleJuly4 tag and @VisitMusicCity.