Cooking at home a lot right now? And missing Nashville, of course. Bring a taste of Music City into your homes with this collection of recipes from Nashville restaurants and chefs. Cook these dishes at home, and enjoy them with your loved ones. When you're ready to travel, come to Nashville, eat at these restaurants, and see how yours compares to the original.

We hope these recipes provide you with comfort, inspiration, and a taste of Music City. Most importantly, we hope they bring you a bit of joy.

Each week, we'll feature a complete Nashville meal with recipes for an appetizer or side dish, entree, dessert, and a beverage. So come back every week to try the new batch of Nashville recipes. If you just can't wait a week and want to cook all the recipes tonight, view the complete Recipe Notes cookbook (you can even print it as the star of your cookbook collection!).

When you do make these dishes, show us! Share a picture of your final product on social media using the hashtag #NashvilleRecipes for a chance to be featured here. 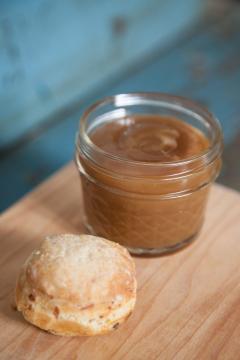 Whiskey Jam
From The 404 Kitchen and Chef Matt Bolus

In a hot pan toast the cloves, allspice, black peppercorns, cinnamon, and orange peel until very aromatic. Combine with the rehydrated raisins and stir to incorporate. Allow this mix to rest for 10 minutes.

In a pot large enough to hold all the ingredients, combine the raisin and spice mix with the apple juice (or cider) and bring the mixture to a boil over medium-high heat.

Once the mixture has reached a boil, remove it from the heat and allow it to cool to a safe temperature to blend. Blend all the ingredients on high speed until the liquid is smooth. Strain the liquid through a fine chinois, discarding the solids.

Put the liquid back into the pot and add the pectin. Whisk continuously over medium heat until the liquid reaches 235 F. Remove the liquid, it should be thickening at this point, from the heat and whisk in the final 2 cups of whiskey.

Chill the mixture over an ice bath until completely cool.

Heat the oil in a frying pan to 375 degrees. Add broccoli and fry for approximately 30 seconds or until the edges appear crispy. Once cooked, remove and set on a paper towel. Top with fresh lemon zest and sea salt.

Mix all dipping sauce ingredients into VitaMix or food processor and puree until smooth.

Duck Magret with Figs
From The Little Gourmand
6 servings

Magret is a duck breast from the Moulard (Mulard, in French) breed of ducks. Moulards have a deeper, richer, beefier flavor. In France, magret generally refers specifically to the breast of moulard ducks that have been raised for foie gras.

Duck breasts Criss-cross the skin of the 3 duck breasts with a knife. Place them in a non-stick pan, season, and grill over low heat for about 15 minutes. Discard the fat, flip the breasts over and cook on the other side for another 5 minutes.

Figs Wash the fresh figs and cut them in halves. Melt the butter in a pan, add the figs, season with salt and pepper, add rosemary leaves, and cook over low heat for about 10 minutes.

Sauce When duck breasts are ready, remove from the pan and keep them warm under foil. Deglaze the pan with the fig vinegar, add red wine and pepper, and let simmer until reduced by half. Using a fork or a whisk, gently stir the cream until the sauce is smooth and let simmer for a few minutes.

Service Cut the breasts in ⅛" slices and serve on individual plates with fresh figs and sauce.

One of the family businesses of the Nashville-based Cheek family was the Cheek-Neal Coffee Company, creators and brewers of Maxwell House Coffee and Tea. The specialty blend was named after and marketed by the best hotel in Nashville, the Maxwell House. The success of the brand launched the local business into nation-wide production and is said to have captured the attention of President Theodore Roosevelt, who exclaimed that it was “good to the last drop!” Cheek-Neal was created by Joel Cheek, the cousin of Leslie Sr.’s father C.T. Cheek. C.T. had been an early investor, and Leslie Sr. bought stock as well. In 1928, the Postum Company, later renamed General Foods, purchased Cheek-Neal Coffee Company for $45 million. As an investor, Leslie Sr.’s fortune quickly expanded, likely also expanding his plans for Cheekwood.

Mix dry ingredients set aside. Cream butter & sugar till creamy. Mix eggs 1 at a time then add sour cream & vanilla, mix till blended. Add dry ingredients lightly blend. Add 1 scoop of batter (ice cream scoop will work) to buttered (or use liner) muffin pan, sprinkle the "middle" sugar, top with 1 scoop of batter then top with the topping. Bake at 3500 20-30 minutes till baked through.

Mix topping ingredients in butter until it becomes a crumble. Sprinkle on top.

For the Good Times
From Skull's Rainbow Room

At Skull's Rainbow Room, we always try to have fun doing variations on classics. In this case, we broke down the old fashioned and did it with rum. This is a great introduction to an old fashioned for those with a sweeter palate. Appropriately named "For the Good Times," we will have this drink ready and waiting for you when the good times return at Skull's Rainbow Room!

Are you proud of the Nashville dish you made from scratch? Take a picture of your final product and share it with us on social media using the hashtag #NashvilleRecipes for a chance to be featured on this webpage.