Or the closest thing to it. Join our mailing list to be the first to hear about Nashville's new releases, events, announcements and more.

Thank you! This window will close automatically.

We're sorry, there was an error adding your email to our newsletter. Please try again later. This window will close automatically. 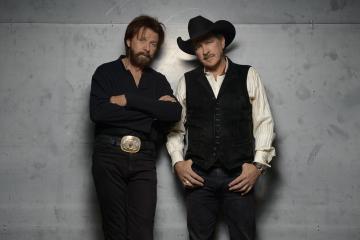 With 20 No. 1 hits stretching back to 1991, two GRAMMY awards, dozens of ACM and CMA honors, and a discography counting more album sales than any duo in history – regardless of genre – Brooks & Dunn’s influence on today’s country has never been in question. Hits like “Boot Scootin’ Boogie,” “My Maria” and “Believe” have propelled the duo to more than 30 million albums sold, with the New York Times heralding “together they helped drive the power-country era of the early- to mid-1990s and continued to benefit from the sea change in the genre they helped initiate right through their most recent albums.” Their original “Merle Haggard meets The Rolling Stones” vibe made them progressive stars. The duo’s recently released collaboration project REBOOT debuted at No. 1 on Billboard’s Top Country Albums. The impressive feat marks the first time the duo has topped the album charts since 2009 while simultaneously earning the duo their 10th Billboard 200 Top 10 album, the most of any country duo or group in the chart’s history.  In 2019 the duo was inducted into the Country Music Hall of Fame in the “Modern Era Artist” category. In 2021 Brooks & Dunn undertook their first nationwide tour in ten years with their anticipated The REBOOT TOUR which continued into arenas this year, as well as wrapped their hugely successful and the longest-running country residency in Las Vegas, “REBA, BROOKS & DUNN: Together in Vegas.” 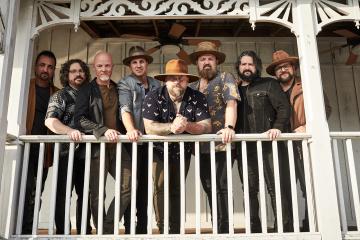 Zac Brown Band is a multi-platinum, GRAMMY Award-winning, Southern rock group led by frontman, Zac Brown. Throughout their career spanning more than a decade, Zac Brown Band has had six consecutive albums reach the top 10 of the Billboard 200 and five consecutive albums debut at No. 1 on Billboard’s Country Albums chart. To date, the group has won three GRAMMY Awards, including Best New Artist in 2010, sold more than 30 million singles, 9 million albums, amassed over 10 billion catalog streams to date, achieved 16 No. 1 radio singles and are the second act to top both the Country and Active Rock formats. Zac Brown Band has headlined eight North American Tours and currently holds the record for most consecutive sold-out shows at the iconic Fenway Park. Symbolic of their massive success at the ballpark, in July 2022, Zac Brown Band was inducted into the Fenway Music Hall of Fame, joining music icons Paul McCartney and Billy Joel. Since their debut, Zac Brown Band has developed a reputation with critics and fans alike as one of the most dynamic live performers, marked by strong musicianship that defies genre boundaries. 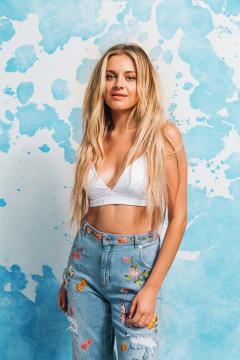 With her debut album The First Time (Black River), Kelsea Ballerini became the only female country artist to hit No. 1 with her first three consecutive singles from a debut album. She has logged four back-to-back Top 10 entries on the Billboard Top Country Albums chart. With 31 certifications from the RIAA to date, her catalog boasts a string of essential smashes such as the double-platinum “Miss Me More” and “Peter Pan,” platinum-selling “Hole in the Bottle” with Shania Twain, gold-selling “I Quit Drinking” with LANY and the recently certified platinum “Half of my Hometown” feat. Kenny Chesney, which marked Kelsea’s seventh No 1. She has garnered two GRAMMY Award nominations, won two ACM Awards, two CMA Awards, took home the iHeartRadio Music Awards honor for “Best New Artist,” and received multiple career nominations from the ACM Awards, American Music Awards, CMA Awards, CMT Awards, and People’s Choice Awards. Most recently, Kelsea led the field for 2022 CMT Music Awards nominations with three nominations for “Video of The Year,” “Collaborative Video of The Year” and “CMT Performance of The Year.” She also earned a nomination for “Music Event of the Year” for the 2022 ACM Awards as both artist and producer of “Half of my Hometown” feat. Kenny Chesney. This marked Kelsea’s first ACM nomination as a producer. She concluded 2021 as the No. 3 most-played female artist on country radio and CMT “Artist of the Year” in addition to picking up “Musical Event of the Year” and “Video of the Year” at the CMA Awards for the platinum-certified “Half of my Hometown” feat. Kenny Chesney. She has co-hosted the CMT Awards on CBS nationwide, released her first original book of poetry Feel Your Way Through, and Dolly Parton tapped her to star in the audiobook of Run, Rose, Run. In addition, the multi-platinum country superstar has recently been named the newest face of COVERGIRL. She also was inducted as a member of the famed Grand Ole Opry in 2019. At the time, she notably was the Opry’s youngest member, in its nearly 100-year history. Kelsea’s upcoming fourth album, Subject to Change was recently released.