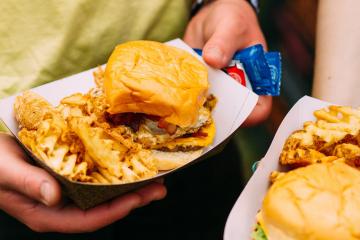 Budweiser
Visit the Budweiser Macro Bar located at The Green behind Ascend Amphitheater, a great place to relax and enjoy the day.

SLIQ
Visit the SLIQ Spirited Ice Tent to play the SLIQ DISQ game for a chance to win a free pop koozie, perfect for keeping your SLIQ frozen cocktail cool during the festivities!

Wyler’s Light
Cool off at the Wyler’s Light and Pure Kick Hydration Stations. The misting tents and water stations are located throughout the event site. You can also flavor your water by grabbing a FREE sample of Wyler’s Light Singles To Go or Pure Kick Hydration Drink Mix Sticks at select beverage stations throughout the event site and the information booths, which will be located at Walk of Fame Park and at Fourth and Broadway.